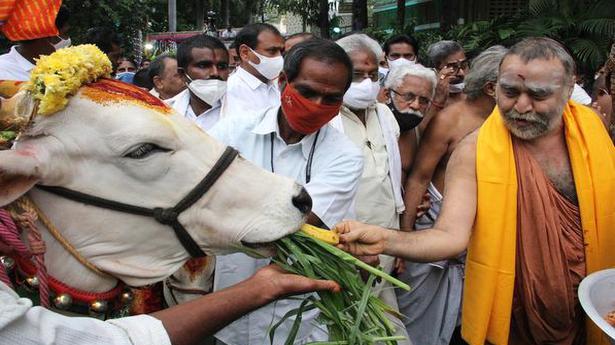 The Tirumala Tirupati Devasthanams (TTD) has made the decision to source products made using “natural farming methods” to meet their future needs.

The TTD procures huge quantities of grains and vegetables to make “prasadam” at the Sri Venkateswara temple in Tirumala and to provide daily food for worshipers, students and patients in its institutions and hospitals.

The announcement came from TTD chairman YV Subba Reddy at the ‘Gau Maha Sammelan’ closing ceremony here on Sunday, where he ensured he was sourcing products such as rice, jaggery and turmeric grown without use chemicals.

Regarding the “Gudiko Gomatha” program which offers a cow and a calf to temples and mutts, Mr. Subba Reddy wanted the seers and the Vedas Pathasalas to come forward.

Mr. Reddy also highlighted the importance the government places on the welfare of farmers and natural farming methods.

Patanjali Yogpeeth founder Baba Ramdev supported TTD’s proposal to the Union government to recognize the cow as a national animal.

Besides a specific request to Prime Minister Narendra Modi and Interior Minister Amit Shah, he also called on all chief ministers to support the cause.

Kanchi Kamakoti Peetham Pontiff Sri Vijayendra Saraswati performed “Go Puja” in front of a cow and calf “Kapila” at the “Godhooli” event, which stood out as a special attraction with native breeds such as “Kankrej”, ‘Punganur’, ‘Kangeyam’, Ongole, ‘Gir’, ‘Sahiwal’ and ‘Hallikar’.

Tirupati MP B. Karunakar Reddy called on the TTD to be a guide in supporting “cow-based farming”, while former bureaucrat Vijay Kumar argued that three crops a year with organic methods could struggle. against the global food shortage and achieve the goals of ending hunger.